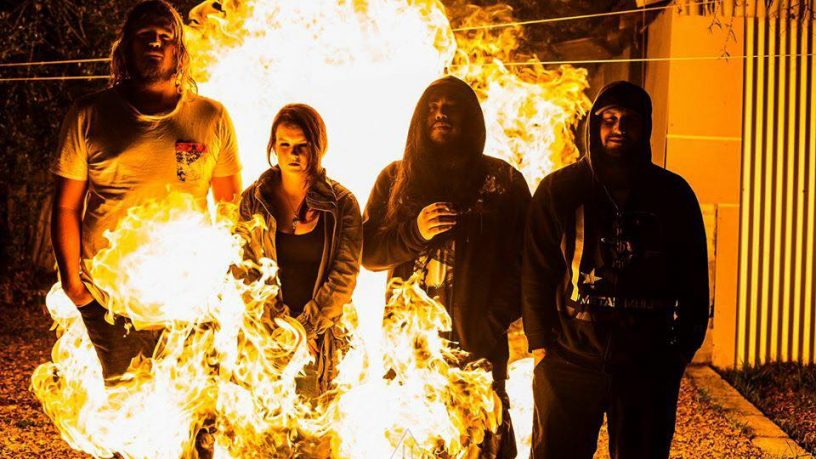 Kraill’s sound is described as a mixture of Garbage and Silverchair.

So here's our little speel on how Kraill came to be. It was one of many drunken nights in the City, and classic Britt abandoned all the lesbians at The Court and was headed to Capitol - or anywhere for that matter, in search of friends. Only to realise she had none. With a lack of money, motivation and companionship, she ordered a kebab outside Capitol to try and figure out her next move. Not wanting to eat by herself, she pulled up a chair with this random bunch of Kiwi dudes, one of which so happened to be our very talented Jeremy "The Captain" Young in his Cookie Monster shirt. Being friendly enough, they started chatting. Realising that they only lived two minutes apart from each other, they all caught a cab home together - on the way to drop Britt at her joint, a drunken shit dribbling conversation was happening, when Jez said something about; "I'm just a struggling musician!" Britt, in her drunken state, swung around from the front seat and said; "Oh.My.God. I sing, lets catch up!" Leaving the boys with an out-of-tune, drunken rendition of "Run to Paradise" (but hey! It worked!) So the soon-to-be Captain Jez gave Britt his number, saved as "Big Fucking Jezza" and the taxi dropped her off, leaving her to stumble up her drive way and pass out in bed, and leaving the boys to wonder what the hell just happened?! The next day, once the hangover had warn off Britt decided to message this random guy, sporting her "I'm not even scared" attitude. This, my friends, is how "You Don't Know Me" came about to be recorded. More songs were created, written, and recorded, including "Forgetting but not Forgotten" "Your Girlfriends a Bitch" and "Broken Fairytale" and then Britt and Big Jez, perched in his Captain's chair, realised something might be happening here, and that they probably should do something about it. Then the impossible job started - scouting for a drummer and bassist. IMPOSSIBLE. Until one day, when all hope was nearly lost, our Mexican/Filipino friend replied to the ad. They waited in anticipation to meet this mysterious Gumtree dude, thinking it was going to be some 50 year old wannabe in a mid life crisis. To their relief the luscious haired Pedro walked through the door. So, one down, one to go. Drummers. Even more impossible. It gave us a chance to come up with our name though, another incredibly hard job, but Kraill was decided, which comes from the skate board trick, Krail. We had a few options on drummers but they all turned out to be too metal, or too lazy. One day, when all hope was lost again, Britt had a realisation that one of her friends was a drummer! And this is how our farmer boy, Chris, came along, who looks remarkably like Jesus, which kinda fits coz it was a miracle we found him! Providing us with a shed to practise in, and the lovely Miss Hailey (who is our personal chef, nurse, groupie (to Chris), stage helper and assistant manager) it had began, oh shit.

Working on mastering the new EP so it can be released early next year.

More Than You Know