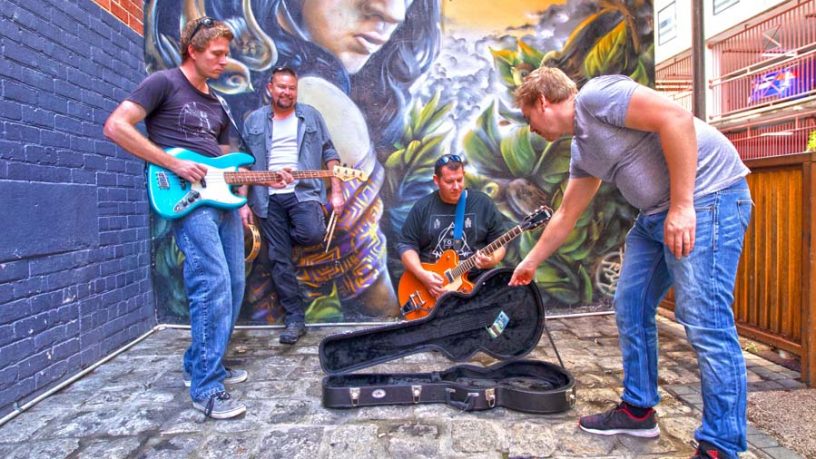 We are an original, eclectic, Indie Rock band. The band members span from three different generations of music and in turn, the band then creates music that can move from 90’s rock to heavier beat driven 00’s aussie rock.

We all formed because of our friendship with our drummer Steve. Steve worked with our guitarist Matt, Matt and Glyn have known each other since they were kids... and Steve used to drive through Chris' work for coffee every morning. He mentioned to everyone that he played drums and he also had recording gear. Over the years we have created tracks and learnt how to record them as well.

We helped to host a Battle of the Bands competition at The Kewdale Tavern in 2018. We've made some great contacts along our journey and we managed to use them to draw together 15 bands and take over a huge venue. The night culminated with us giving the winning band airtime on Boom Radio, and interview with the drive team, rehearsal time at Vision Studios, a recorded gig and media content from Sofar Sounds Perth and cartons of beer from Gage Roads Brewing Co.

The Biggest highlight though was releasing our first in house recorded E.P. late in November last year. Every time you play, create and record music you learn something new.. but it felt great to see our first album out for public viewing.

We are currently finishing off our new single "Downstairs For Dancing". The new track was recorded and produced in our home studio over the last 3 months. We are set to release it at the start of September and our launch gig will be at The Sewing Room on the 27th of September.

Our drummer Steve used to play drums for an Aussie Rock band called Carbon14 back in the 90's.

Releases by Pictures Of Virginia

The Girl Next Door

Heartfelt Stab In The Back