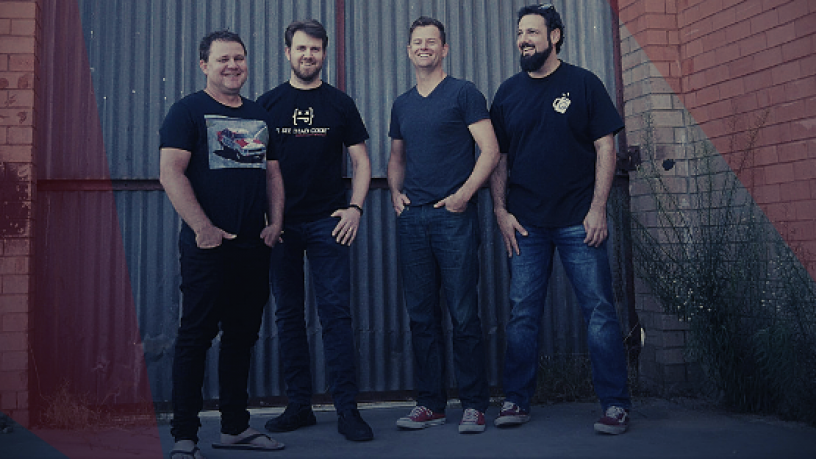 From a straight up classic guitar based sound that teeters on garage radio rock hit singles, to sometimes a more progressive sound that has given birth to 7 minute opus’s. If you have an ear for a quality groove, and a catchy vocal melody we consider ourselves purveyors of a sound that will keep beating long after you hear the last lick.

Originally formed from an extended family unit consisting of John (singer/songwriter), his brother in law Jason (Lead guitar) and partner Leanora (bass). We jammed with a long time collaborator on drums before parting ways and opening the notorious revolving door of drummers, which delivered both the sublime and the crazy. We decided to stop messing around with randoms haha and bring in the heartbeat of the band from an old mate, Ryan. Leanora switched to keys and another good friend Luke joined to fill the bass void. We played for over a year as a 5 piece before Lea and Luke left for personal reasons and we settled into a tighter sounding 4 piece with another old friend Ross on the bass - this is our line up to date

No specific decade or genre seems to stand out.... We all bring our own influence and experiences to a Dirt Walkers jam. Whatever the sound, we seem to mesh it all together and generally the result is heart felt, fun and meaningful.

Playing support for Record Cub Roadshow’s Best of The Doors gig with End of Fashion’s Justin Burford resurrecting Jim Morrison at Badlands in 2017. Man that was one hell of a night!

So we've just dropped a brand new single: “Love Letters” - its available in all the usual places and we're working on recording some more tracks to get out an EP or even album (depending) over the next 6-12mths. We also have some gigs coming up at the Indian Ocean Hotel on Friday 26th April and yet TBC at The Basso in May - stay tuned.

Releases by The Dirt Walkers