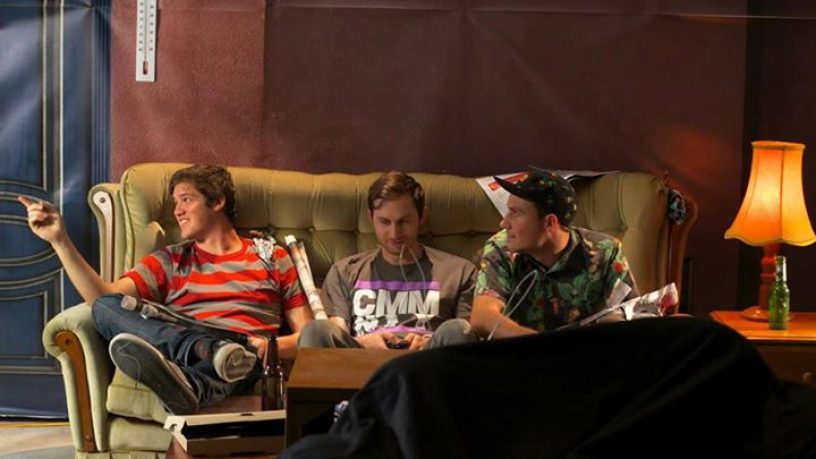 I honestly can no longer physically hear our music as a specific sound. I just hear my mates attempting to make our favorite kind of music. We grew up on golden era, conscious hip hop and that is still my personal favorite style of music. Social commentary is universal and it is the basis of our themes. I’m tied between the aesthetics and nostalgia of the conscious hip hop days with the excitement of pushing boundaries with current and future hip hop. I guess we try to blend what we think are the best traits of hip hop into something we’d like to listen to.

Myself (Pronto) and Roc Walla grew up in the eastern hill of Perth together. We learned of our similar love for hip hop in high school and started playing with the idea of making some of our own. When we put a couple of terrible tracks online, Coin Banks took note from the other side of WA. Our relationship with Coin grew and we soon had a 3rd member of what was to become "The Stoopid Fresh Crew". We soon realised a crew needed a DJ. We happened to meet Arms In Motion at a party and peer pressure him into becoming our DJ. We all got sick of saying "The Stoopid Fresh Crew" and cut our name down to "Stoopid Fresh". Stoopid fresh was always and oldskool saying but it seemed like loads of people were mis-pronouncing our name for "Stoop Fresh". We thought, why not? Evolution then took its toll, Coin Banks made his way to do hi solo thing, and as a result; we are now "The Stoops"...

It's always been that soulful golden era hip hop. That is the one thing that has brought all of us together. A Tribe Called Quest, Jurassic 5, The Roots etc...

Certainly supporting J5. That was one of the nights of our lives. We won the WAM urban song of the year in 2011 (Free, feat. Georgie Kay). We completed a tour to Sydney last year which was also a highlight.

We've spent the majority of the last few years tweaking and evolving our signature sound in preparation for what could almost now be regarded as a Debut release (although it is our third). The EP, titled Milk & Bread is an entirely self produced EP which earmarks yet another new direction for us. The first single from Milk & Bread, titled 'Middle of a Riot' is a 'tongue in cheek' song that paints/reflects our modern day 'keyboard warriors'. Being self centred and ignorant are two symptoms of the privileged first-world lifestyle. The song takes our first world problems and jams along to them in such positive fashion it's almost a guilty pleasure. But please don't think this is anything but preachy. We make sure of this by name-checking ourselves as being part of the problem. I think it's this kind of self deprecation that makes the track so appealing (well from what I can gather from those that have heard it). 'Middle Of A Riot' signifies a new-found maturity in our sound, exposing both a unified ideology and personality to the group. It's simply an entree of what we'll be dishing up in "Milk & Bread".

We've worked with Empty a fair bit. He performed a lot of the string sections on Stoop Squared. We also had him feature on a verse, as well as other local artists; Mathas, Delirious, Olwrite and Rae. Rae was also the producer for Free which did so well. We teamed up with The Accumulated Gestures for a couple of shows. That was great as they learnt a bunch of songs and we were on stage with a 9 piece soul outfit.

Releases by The Stoops

Middle of a Riot (Single)