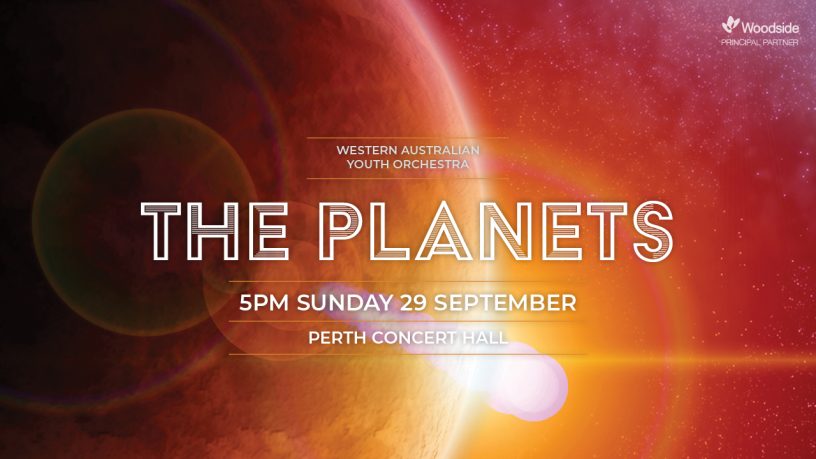 Full live orchestral sound with over 100 members performing on stage at the Perth Concert Hall.The orchestra is a full symphonic orchestra which includes, strings, brass, woodwind and percussion.

For over 40 years WAYO has inspired young people to achieve excellence through a love of music, while also helping them develop skills of self-esteem, discipline, teamwork, leadership and performance. As one of Australia’s leading and most comprehensive youth orchestra programs, with over 400 members from around Perth, South West WA and beyond, WAYO is committed to the long-term investment of helping our young musicians realise their potential and their dreams. WAYO is a family of orchestras, ensembles, and initiatives, with the flagship WA Youth Orchestra at the helm. You can read more about our ensembles https://wayo.net.au/ensembles/ WA Youth Orchestra Conductor & Musical Director – Peter Moore, OAM

The orchestra showcases the talents of Perth and Western Australia’s young orchestral musicians aged 12 – 24 years old and has a deserved reputation as one of the finest youth orchestras in Australia. WAYO presents an innovative and accessible concert program, ranging from Concert Hall blockbusters, special outdoor performances and our ever popular children and education concerts.

In 1998 WAYO was invited by the Hyogo Prefecture to tour Japan, giving seven concerts throughout the Hyogo and Tottori Prefectures, furthering an already strong sister state relationship. WAYO performed in Europe in 2005, Singapore in December 2009 as part of their tour to Asia, and was the first youth orchestra in the world to perform in the famous Concert Hall on the Esplanade Theatre, Singapore. In 2016 WAYO returned to Singapore and Japan, thrilling audiences with a collaboration with Orchestra of the Music Makers (Singapore) and soloist Alexandre Da Costa, and a special repeat performance in Hyogo, reliving the performance and visit of 1998.

In 2012 WAYO was also the first youth orchestra in the world to perform with Maestro Ennio Morricone in a sell-out performance at Burswood/Crown Theatre for the 2012 Perth International Arts Festival. This major event was one of the most successful in PIAF’s history. In 2016 WAYO was the featured orchestra in the 2016 PIAF opening Home to an audience of 30,000. The orchestra has previously performed at large major scale outdoor concerts around Perth, including ten consecutive annual seasons of a themed concert in Burswood Park since 2008, and collaborations with the West Australian Symphony Orchestra in King’s Park in 2005 and 2009. WAYO has also performed with music theatre star, Lucy Durack, jazz vocalist, Grace Knight, and iconic pop band, The Whitlams, as well as the Joondalup Resort and Leeuwin Estate Concert Series’. In addition to large-scale concerts WAYO presents its renowned sell-out Children Concerts and Outreach Concerts to facilitate educational exchange, learning, and mentorship.

WAYO continues to offer it's young members high quality orchestral training, inspiring them to achieve excellence through a love of music.