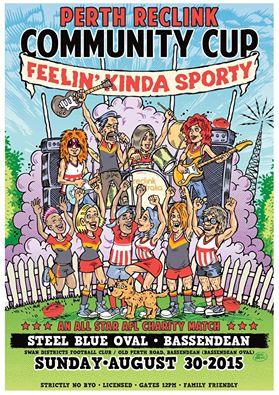 The Reclink Community Cup, a much loved Aussie Rules charity match that pits musicians against media held annually in Melbourne and Sydney, is coming to Perth in August this year.

Now celebrating 21 years in Melbourne with crowds of well over 12,000 fervid supporters attending the notorious Rockdogs v Megahertz rivalry and 4 years in Sydney, preparations are well underway to make the inaugural family friendly day one for all Perthians to embrace.

With teams made up of fearless Perth musicians (the aptly named Bandgropers) and community media and music industry types (The Newshounds), players will puff and pant back and forth across Steel Blue Oval, Bassendean, in a game of partly fun, partly serious hilarity.

After the victorious team is crowned, a celebratory gig will take place in the club rooms. Bands will be announced soon!

Jason Cleary, General Manager RTRFM said, “The Reclink Community Cup is an institution in Melbourne and Sydney and I am extremely excited that we have been able to finally bring it West, I know our community will embrace it with open arms but very modest skills.  I am a little bit worried about running around a massive football oval but it is for a very worthwhile cause!”

The event will raise funds for Reclink Australia, who use sport and the arts to enhance the lives of people experiencing disadvantage. Reclink supports some of the community’s most vulnerable and isolated people – those experiencing mental illness, disability, homelessness, substance abuse, addiction, and social and economic hardship. With a network of over 300 member agencies around the country, Reclink Australia encourages participation in physical activity in a population group under-represented in mainstream sport, recreational programs and associations. In the past 12 months Reclink Australia provided more than 100,000 individual opportunities to participate in over 10,000 sport and arts activities around the country.

Curated by community radio station, RTRFM, Monster Management and Morse Code, the inaugural Reclink Community Cup will be run on a volunteer basis, with all profits going to Reclink Australia.

The Melbourne event launched in 1994 has grown from a small match to an event that now attracts over 12000 and has attracted players from Paul Kelly to Tim Rogers to Courtney Barnett. The Sydney sister event was launched in 2011 and this year the Reclink Community Cup will undertake a national expansion into Adelaide and Perth.

There’ll be tasty food stalls and both alcoholic and non-alcoholic beverages on offer.

Players, coaches and bands will be announced in the coming weeks!

Also available from the RTRFM Office.