A Moment in Time 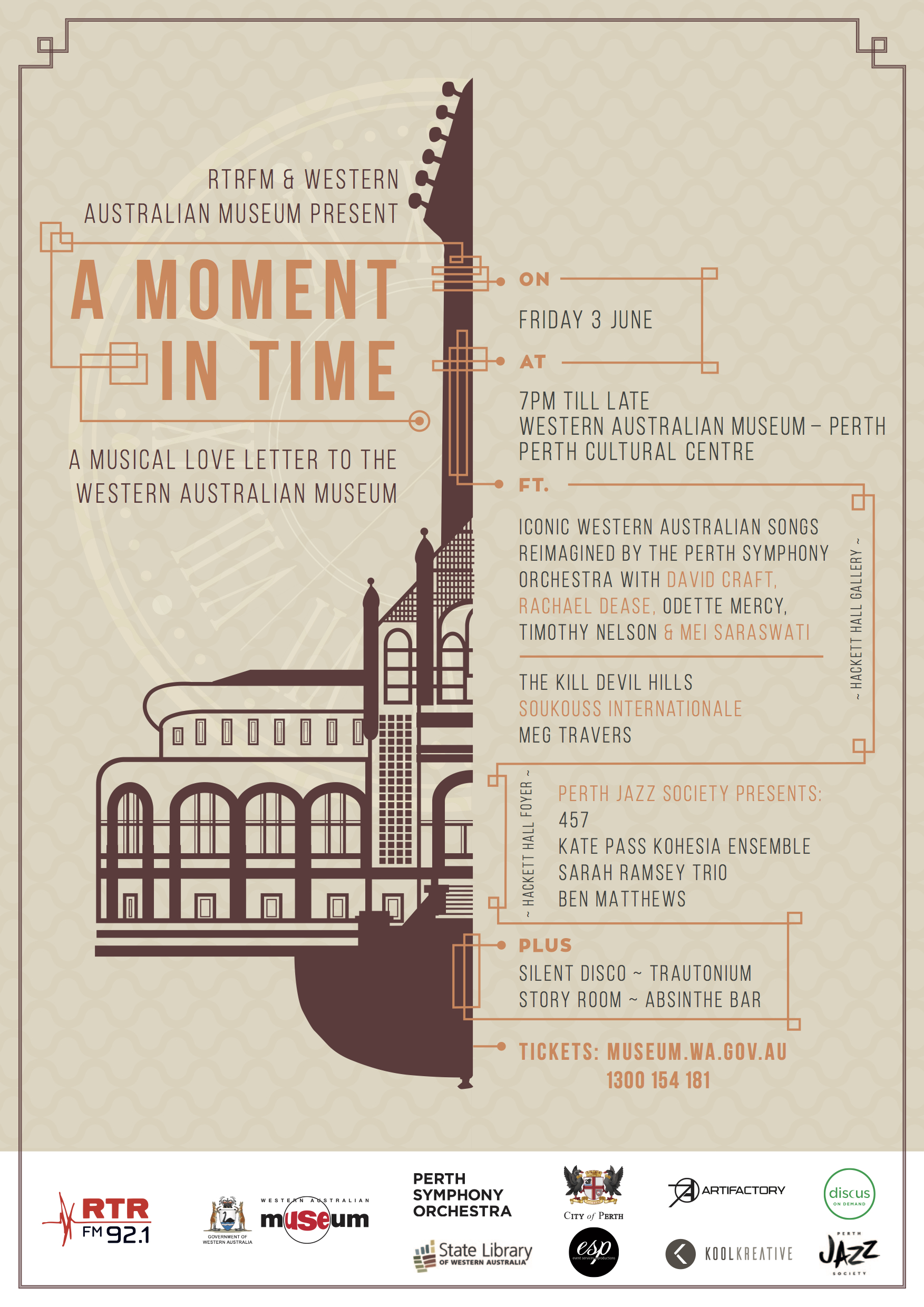 PLEASE NOTE: Presales for both Orchestra tickets & General Admission tickets have SOLD OUT — there’ll be limited GA tickets on the door from 6.30pm on the night.

In the historic Hackett Hall Gallery, five West Australian singers – David Craft, Rachael Dease, Odette Mercy, Timothy Nelson and Mei Saraswati – along with a 20-piece orchestra and an all-star band including Malcolm Clark (Sleepy Jackson, Weapon is Sound) and Jozef Grech (Project Mayhem, Flooded Palace) will pay tribute to a hand-picked selection of classic West Australian songs from the likes of Abbe May, The Drones, Felicity Groom, The Stems, Tame Impala and more.

The Hackett Hall Gallery will also play host to Western Australia’s first ever performance of a Trautonium – an extremely rare German synthesizer, originally used to soundtrack Hitchcock’s The Birds – courtesy of Perth musician, researcher and archivist Meg Travers. A Moment in Time will also mark the first time ever, in the Trautonium’s near 90-year history, that it the instrument has been played by a woman. Closing out the Hackett Hall Gallery will be live sets from the high-energy Soukouss Internationale and the mighty Kill Devil Hills.

The Discovery Centre will be transformed with a fanfare of sonic delights, becoming The Gallery of Glorious Sound – an exhibition of extraordinary instruments lovingly put together by members of Artifactory in conjunction with the Western Australian New Music Archive (WANMA).

A rambunctious collection of weird, wild and wonderfully exotic instruments will be installed in the display cases for patrons to puzzle over and postulate upon, culminating in a special one-off performance featuring a number of these very special instruments.

Also in the Discovery Centre, patrons can kick back with the green fairy and a classic Absinthe Makes the Heart Grow Fonder bar, as RTRFM DJs go head-to-head for a four-hour silent disco featuring El Ritmo vs. Trainwreck, Siamese Dream vs. Bass Check, Disco Science vs. Burn the Airwaves and Rock, Rattle & Roll vs. Black & Blue.

In the Museum’s Dampier Gallery, you can take part in an interactive storytelling experience with the Story Room, celebrating and preserving personal histories of the Museum.

A Moment in Time – a once-in-a-lifetime celebration of the Western Australian Museum and WA music.

Please note: because this event is a collaboration with the Western Australian Museum, we unfortunately cannot grant free entry to Gold & Platinum RTRFM subscribers.