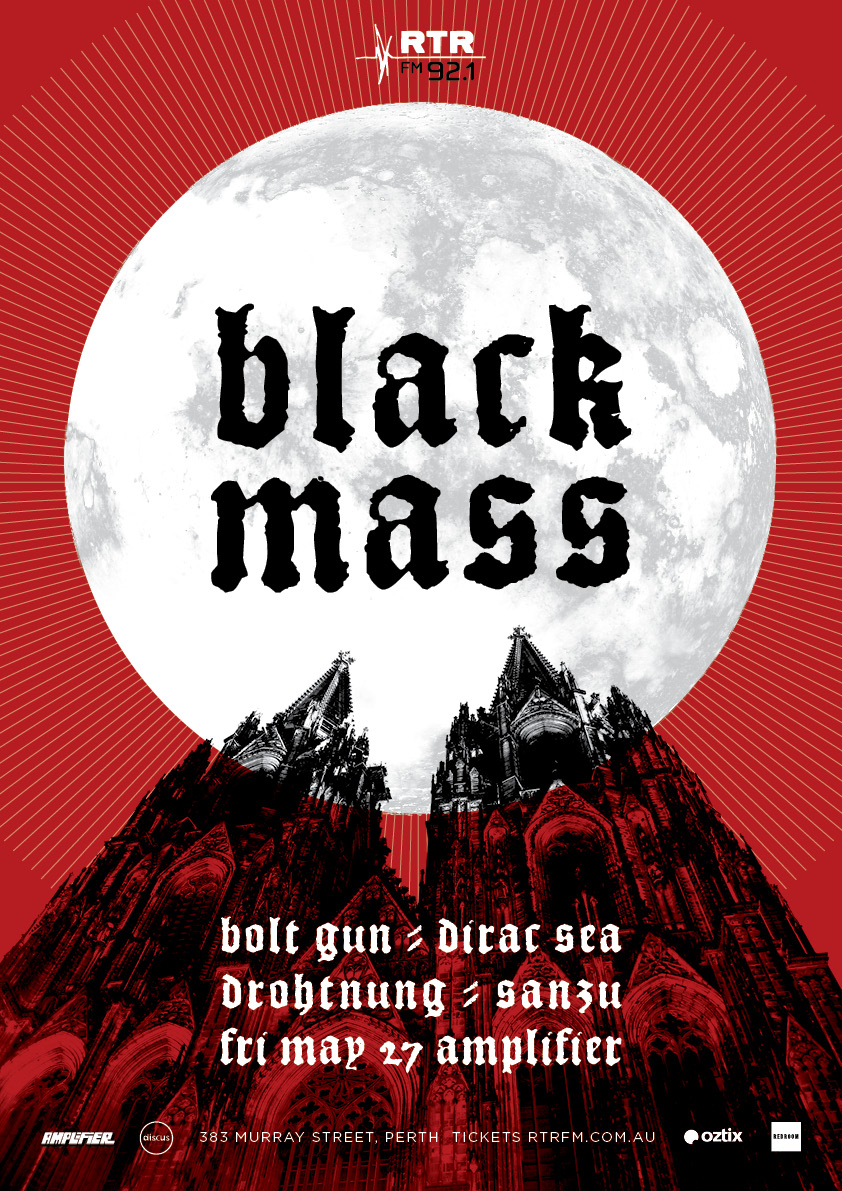 RTRFM BLACK MASS – A PROCESSION OF DOOM AND BLACK METAL AT AMPLIFIER BAR ON FRIDAY, MAY 27

Bear witness to four hours of heavy extremity from four of the most confronting artists in Perth – BOLT GUN, DIRAC SEA, DROHTNUNG & SANZU.

Fremantle’s BOLT GUN deal in undulating waves of droning ambience and punishing, unrepentant black metal. Their second EP – last year’s Iron Surgeon – marries unsettling ambience with relentless explosions of ferocity in its 30 minute runtime, like an unholy concoction of David Lynch, Swans and Burzum. Live appearances from Bolt Gun are rare – this is something you don’t want to miss.

DIRAC SEA are a sleeper cell of immense talent. Their sole EP – the one-track, 20-minute Take Care of Yourself When Facing Fiends // Lest You Become a Fiend Yourself – oscillates brilliantly and subtly between introspective moments of floating ambience and immense of bursts of intoxicating dread. This is powerful, vital music, channeling the best parts of Deafheaven, Hope Drone and YOB into a focused, compelling sound that transcends genre.

“Dirac Sea’s tightly-executed drone-doom set is highlighted by the guttural ejaculations of their singer, whose bear-like physiognomy is clearly just right for the job.” – THE MUSIC

DROHTNUNG have spent the last ten years plumbing the depths of sonic depravity, and the sounds they’ve unearthed make for some of the most confronting listening of a lifetime. Drohtnung’s 2015 record – In Dolorious Sights – is a morbid, catastrophic collection – a veritable soundtrack to a journey through the River Styx. These are sounds not of this Earth; they are devastating, destructive and completely entrancing.

SANZU are a stampeding behemoth of unmatched savagery, with a sound that’s earned critical praise from around the world. Their debut record – 2015’s Heavy Over the Home – recalls the fury of Gojira, striking with the force of a meteor. This is a band that demands your attention, that won’t let you turn away.

“Sanzu’s Heavy Over the Home is the kind of album that’s so weighty and forceful you feel as though you might be flattened just listening to it; it’s beyond marching elephants, it’s elephants marching on top of you.” – METALSUCKS