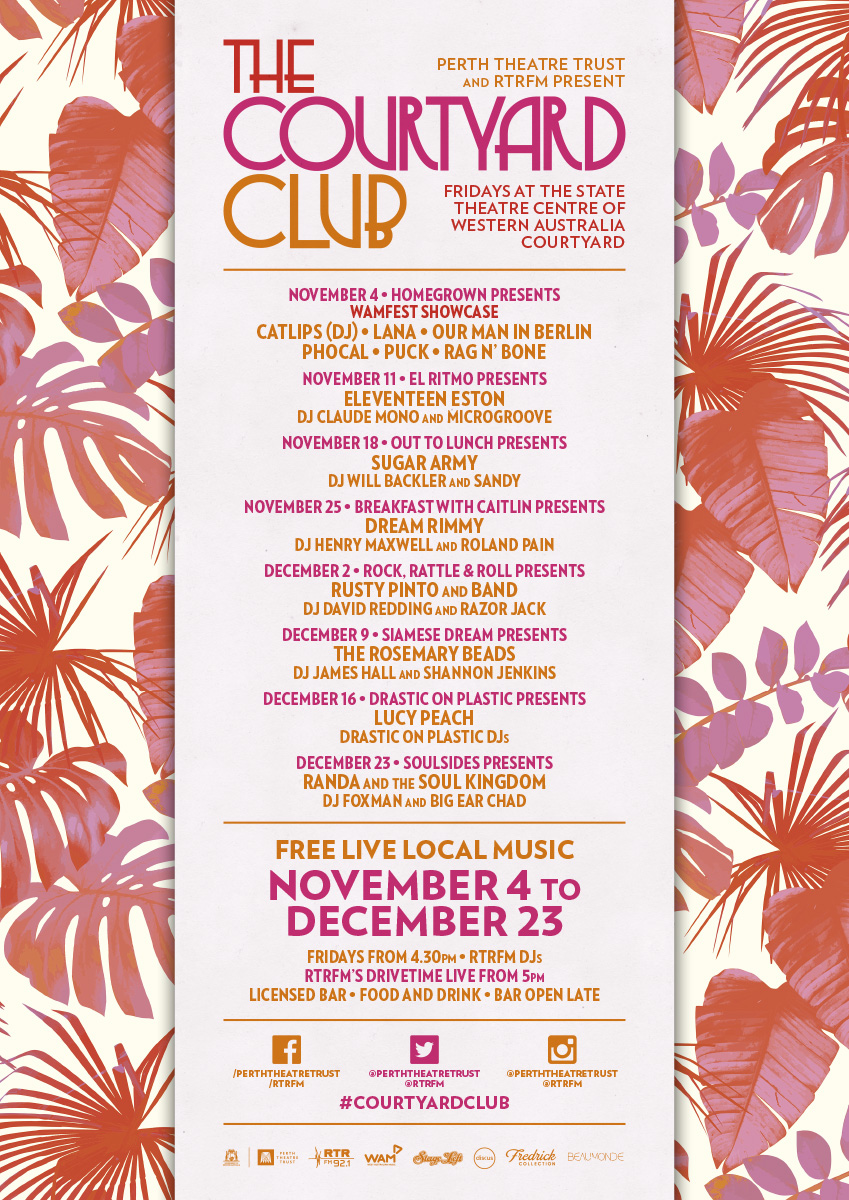 Perth Theatre Trust & RTRFM are proud to announce the full 8-week lineup for the return of free live music series Courtyard Club, taking place every Friday from November 4 to December 23 in the State Theatre Centre Courtyard.

The series opens on Friday November 4 with six hours of Perth’s finest electronica, indie rock and avant-pop as a part of WAMFest’s Friday showcases. Kicking off at 5pm, catch Catlips (DJ), Lana, Our Man in Berlin, Phocal, Puck & Rag n’ Bone playing long into the night, all broadcast live-to-air on RTRFM’s Drivetime.

In November, the series will see live sets from groove extraordinaire Eleventeen Eston; indie rock stalwarts Sugar Army, who recently released their third album Beast to critical acclaim; and the sublime shoegazing sounds of Dream Rimmy, fresh from the release of their new single Landslide.

Throughout December, Courtyard Club grows even more diverse, with sets from rockabilly stalwarts Rusty Pinto and Band; Perth indie rock legends The Rosemary Beads, who’ll have their first album in 20 years in tow; exultant folk-pop wunderkind Lucy Peach; and the irresistible, inimitable funk-soul stylings of Randa and the Soul Kingdom.

Each set will be broadcast live-to-air on a series of one-off Drivetime takeovers, featuring presenters from RTRFM programs across the grid taking over a different drive home, with Latin grooves from El Ritmo, classic 90s sounds from Siamese Dream, rockabilly from Rock, Rattle & Roll and plenty more. RTRFM DJs including Will Backler, Razor Jack, Henry Maxwell and more will soundtrack the kick-off to the weekend, spinning tunes long into the evening.

Courtyard Club is an all ages event with licensed bar and food options, making it the perfect place to kick off the weekend, unwind and bask in the stellar selection of local music our city has to offer.

Enjoy free live music and DJs the stars in the beautiful surrounds of the State Theatre Centre Courtyard, every Friday from November 4 ‘til December 23.