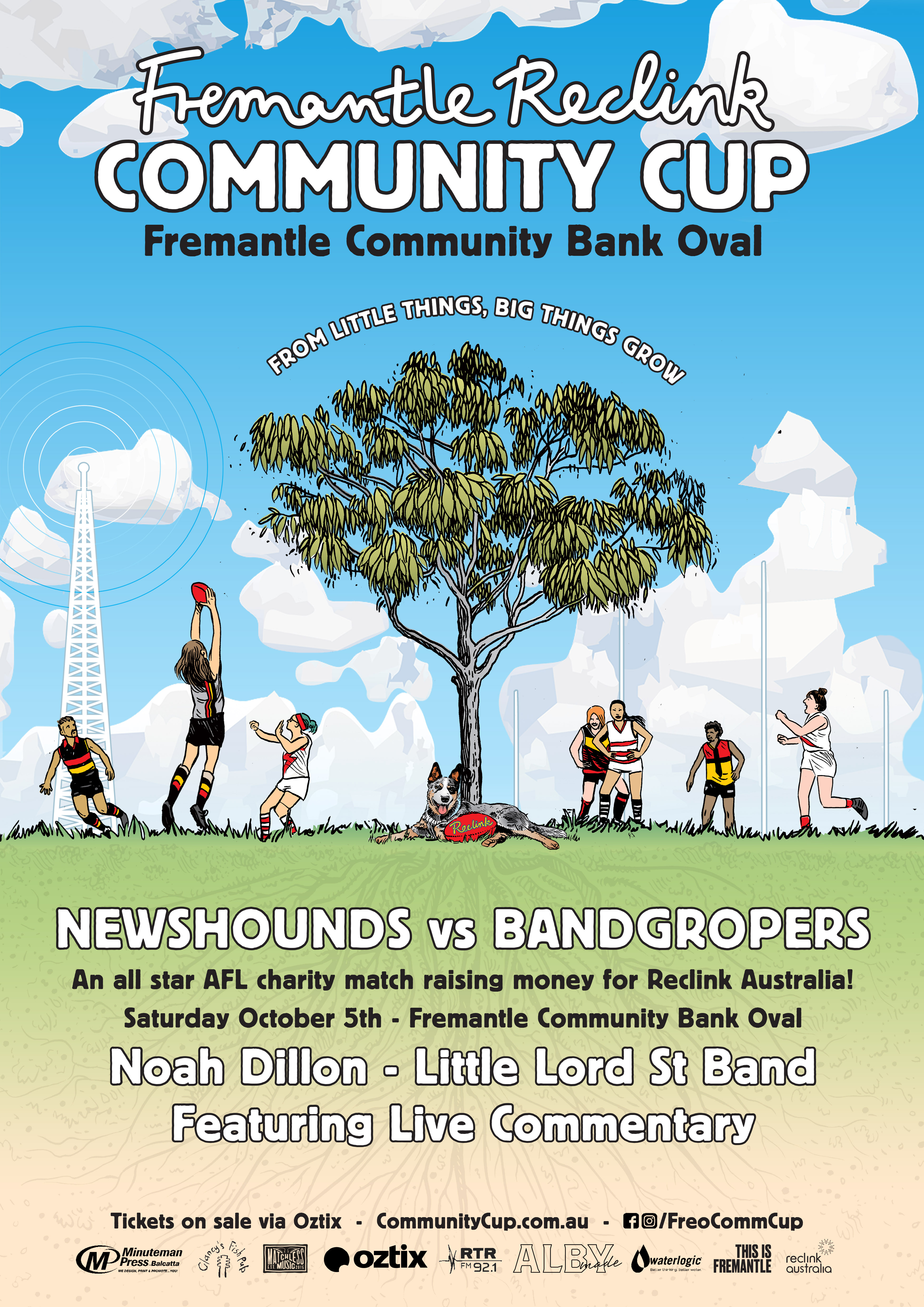 THE FREMANTLE RECLINK COMMUNITY CUP IS BACK FOR THE FIFTH YEAR.

The Reclink Australia Community Cup, a much loved nation-wide Aussie Rules football charity match that pits musicians against the media, is back for its fifth year in WA. This year’s local edition, The Fremantle Reclink Community Cup will take place on the hollowed grounds of Fremantle Community Bank Oval, Saturday October 5th.

From its humble pub-led beginnings, the event is now a hugely successful event on Melbourne’s annual musical (and sporting) calendar. The Community Cups’ achievements are now being replicated right around the country, with community radio stations and local media in each state going head to head with local musicians in a family friendly, entertaining day of grassroots football and live music.

“The Reclink Community Cup is the one day of the year when Perth’s community radio and local musicians, everyday people, connect and come together to help Reclink Australia raise much needed funds that enable us to deliver sport, recreation and arts programs, which make a huge difference to the lives of the neediest in our community.” said John Ballis, CEO, Reclink Australia.

The Bandgropers (WA Musicians) featuring members of Axe Girl, NEW TALK, Odette Mercy and Her Soul Atomics, FLOSSY and a host of more, including a special appearance from Aussie Rock royalty, Tim Rogers.

They will be lead off field by legendary blues man Wayne Green and Donna Simpson (The Waifs).

Plus, on field entertainment will be provided by Noah Dillon and The Little Lord Street Band and a very speical AFL nines game at half time of Reclink Perth’s finest.

Players will puff and pant across Fremantle Community Oval in a game which is part fun, part serious and wholly hilarious, before local musicians entertain the masses on this hallowed footy turf.

There will be tasty food stalls and both alcoholic and non-alcoholic beverages on offer. Alby Beer and Gage Roads Brewing Co will be on bar duties with help from Bar Pop, to keep you hydrated.

All profit for the events go to Reclink Australia, who use sport and the arts to enhance the lives of people experiencing disadvantage. Reclink supports some of the community’s most vulnerable and isolated people – those experiencing mental illness, disability, homelessness, substance abuse, addiction and social and economic hardship.

Gage Roads and Alby Draught are proudly supporting the Reclink Community Cup and you can grab one of their fine ales at the ground thanks to Bar Pop, with all proceeds going to Reclink Australia.