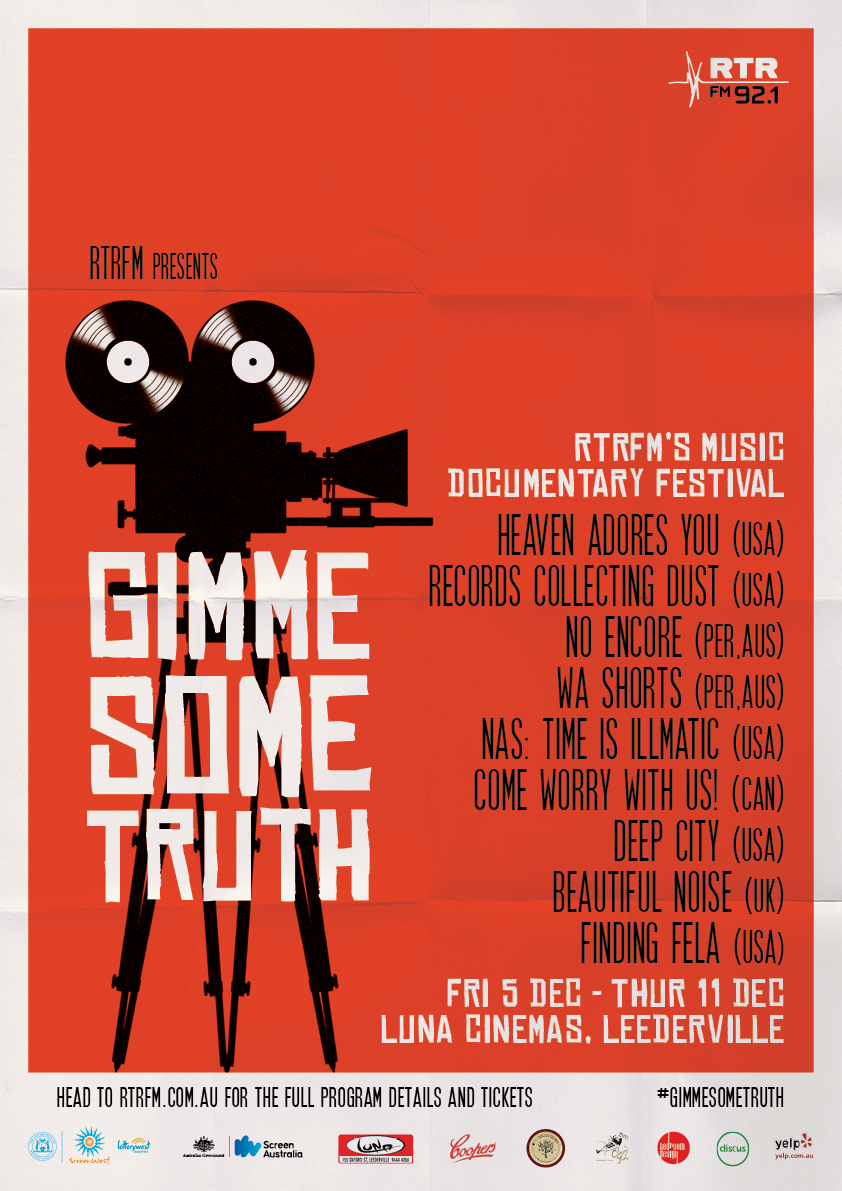 RTRFM is proud to announce the return of Australia’s first music documentary festival, Gimme Some Truth, in 2014.

The 2014 film program traverses diverse genres and scenes across the globe. From the harsh realities of life on the road for Canadian post-rock band Thee Silver Mt. Zion Memorial Orchestra (Come Worry With Us!) to the politically motivated Afrobeat of Fela Kuti (Finding Fela) and the Southern Florida soul movement of the 1960s (Deep City: The Birth of the Miami Sound), Gimme Some Truth will appeal to all lovers of music and film.

Gimme Some Truth opens on Friday, 5 December with Heaven Adores You, an introspective, meditative inquiry into the life and music of the late singer-songwriter, Elliott Smith.

An ailing jazz legend passes the torch to a blind piano prodigy in Keep On Keepin’ On, an award-winning ode to the bonds of music and friendship. Shot over the course of five years by first time filmmaker Al Hicks, the film depicts a 23-­year­-old, blind piano prodigy, Justin Kauflin, and 89-year-old jazz music legend and teacher, Clark Terry.

When new music ensemble Decibel embark on a tour of regional Western Australia, their strange, confronting music rattles the cages of small towns and baffles locals. Insightful, bizarre and humorous, the world premiere of No Encore will appeal to fans of the genre and road stories alike.

WA Shortsshowcases the work of several West Australian filmmakers and producers, including In Search of Freestyle – Episode 1 by Brian Kruger (aka Empty), Todd Who? by Gavin Bond, From The Bedroom to the Stage: The Big Splash Band Comp by Matt Sav, and Radiothon 2014: Feed Your Independence by Silver Squid Productions.

American rapper Nas developed his craft from a young age, releasing his debut album Illmatic at age 17. Paired with energising, revolutionary beats, Nas: Time is Illmatic delivers an electrifying account of the gestation of a rap milestone, and is a program highlight.

Fans of bands like Jesus and Mary Chain, Slowdive, Swervedriver, Cocteau Twins and My Bloody Valentine have found the music documentary of their dreams in Beautiful Noise. The film offers a rare insight into the private worlds of several notoriously press-shy individuals, and is an Australian premiere.

Come Worry With Us! takes viewers on the road with Efrim Menuck and Jessica Moss of Thee Silver Mt. Zion Memorial Orchestra. Come Worry With Us! delivers a heartfelt depiction of the complex choices musicians – particularly women – must make in today’s music business.

Deep City: The Birth of the Miami Sound is an inspirational story that charts the early days of 1960’s soul music in South Florida, the pioneers of that era, and their contribution to the broader American musical landscape. This screening is an Australian premiere.

Listen to the sounds of Gimme Some Truth 2014 here!

Please note that this event does not allow free entry to RTRFM Gold/Platinum subscribers.