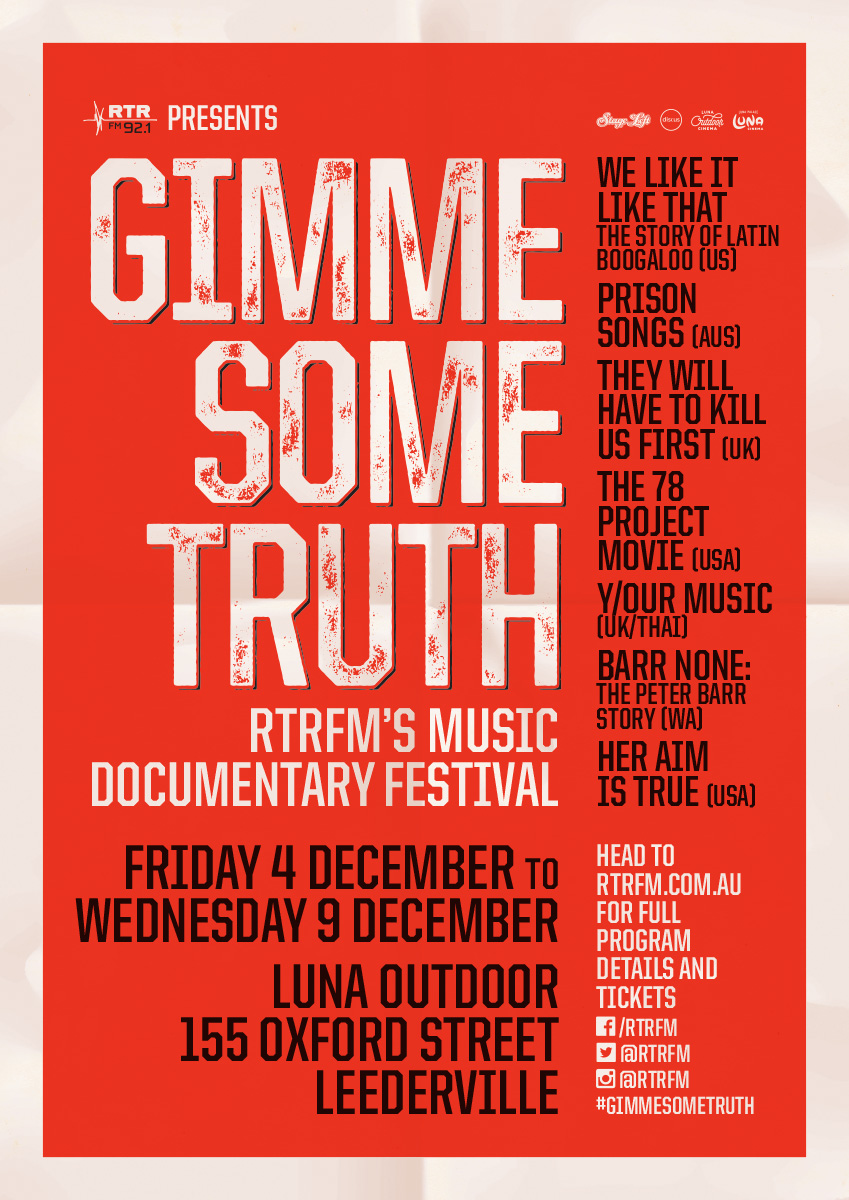 RTRFM is proud to announce the return of Australia’s first dedicated music documentary festival to Perth cinemas in 2015.

Showcasing seven films over six days, Gimme Some Truth 2015 will feature five Australian premieres and one world premiere. Films will screen from Friday, 4 December through to Wednesday, 9 December at Leederville’s Luna Outdoor.

From indigenous Australians singing their way through a prison sentence Prison Songs (AUS), to the amazing and often brutal experiences of musicians in Mali They Will Have to Kill Us First (UK), to the extraordinary story of a fashion photographer in a punk rock world, Her Aim Is True (USA), the 2015 program is musically and culturally diverse, exploring music from all angles in a variety of disparate locations.

Gimme Some Truth opens with We Like It Like That: The Story of Latin Boogaloo (USA). The film is a colourful insight into the world of Latin music in New York City during the 1960s, and the evolution of the genre through to present day. Think Buena Vista Social Club – with a whole lot more hip shaking!

What would you do if music were banned in your country? If the act of making the sounds you loved was declared illegal overnight? They Will Have to Kill Us First (UK) is the story of how Malian musicians fought back against Islamic extremists for their right to make music.

Barr None: The Peter Barr Story (AUS) follows former RTRFM Breakfast presenter, Peter Barr, in his final week presenting Breakfast with Barr after a decade on air. In this heartfelt portrait of a beloved Western Australian broadcaster and local music enthusiast, witness the power of community radio to bring people together.

Inspired by the work of recording journalist Alan Lomax, The 78 Project (USA) follows the stories of up and coming musicians and the music they make in one take on a Presto direct-to-acetate disk recorder.

The music of Thailand is not one most Western countries hear nor see. Y/Our Music (UK/THAI) immerses you in the world of Thai music, both traditional and modern. We meet those that make it and the instruments essential to the Thai sound.

Originally aired on SBS, Prison Songs (AUS) takes us into Darwin’s Berrimah Prison. A place where most inmates are Indigenous Australians, we learn their stories through song in Australia’s first documentary musical.

Jini Dellaccio taught herself to take photos and in 1964 found herself in the midst of a new wave of music. In the back streets of Seattle, Jini immersed herself into the world of The Sonics and The Wailers. In our closing night film, Her Aim Is True (USA), we witness the world of punk rock through the lens of a fashion photographer.

Plus following Barr None: The Peter Barr Story and Her Aim Is True join us for a Q & A session with Chris Butler and Kal Englishby from Silversquid productions the people behind Barr None, as well as the man himself Peter Barr. We will also be joined by X-Press Magazine editor Bob Gordon and local photographer Dan Grant on what makes a good band photo. The Q & A will be moderated by RTRFM’s Paul Van Lieshout.