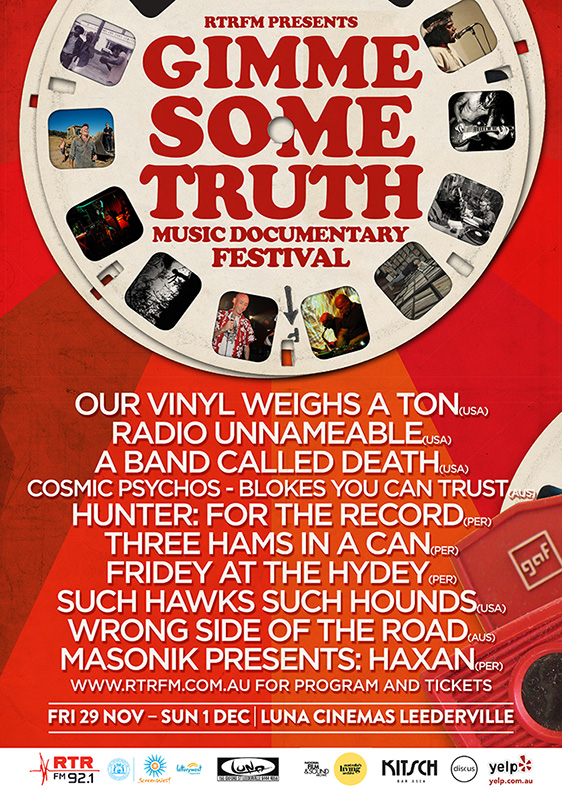 RTRFM 92.1 presents Australia’s first music documentary festival – a three-day feast of some of the most compelling and eclectic films made about music.

Showcasing musicians and scenes that keep the flame alive for independent music. With famous faces in some and untold talents in others, each music documentary has been handpicked for delivering guaranteed movie-going satisfaction.

Gimme Some Truth kicks off with the Australian premiere of Our Vinyl Weighs a Ton, the story of Stones Throw Records and its founder, the enigmatic Peanut Butter Wolf, with an opening night party featuring Ben M and Rok Riley and treats from Kitsch Bar Asia and Yelp, under the stars for the start of the Luna Outdoor season on Friday 29 November.

From captivating to triumphant; Gimme Some Truth features many internationally acclaimed underground music documentaries such as Radio Unnameable, about legendary New York radio personality Bob Fass who has revolutionized the FM airwaves for nearly 50 years; Such Hawks Such Hounds, a tribute to music and musicians of the American hard rock underground; and A Band Called Death – Number 21 on Rotten Tomatoes Best Films of 2013 list – and an engrossing Sugarman-esque story driven by a 70s punk soundtrack that will stay with you long after you leave the theatre.

Gimme Some Truth also boasts a plethora of Australian born documentaries, comprising of more than half the program, with Cosmic Psychos – Blokes You Can Trust and Wrong Side of the Road, plus a special WA feature series including Hunter: For The Record, Three Hams In A Can, and the world premiere of Fridey at the Hydey, about the beloved Hyde Park Hotel and its regrettable demise.

Please note: This is not a free event for Gold Subscriber.