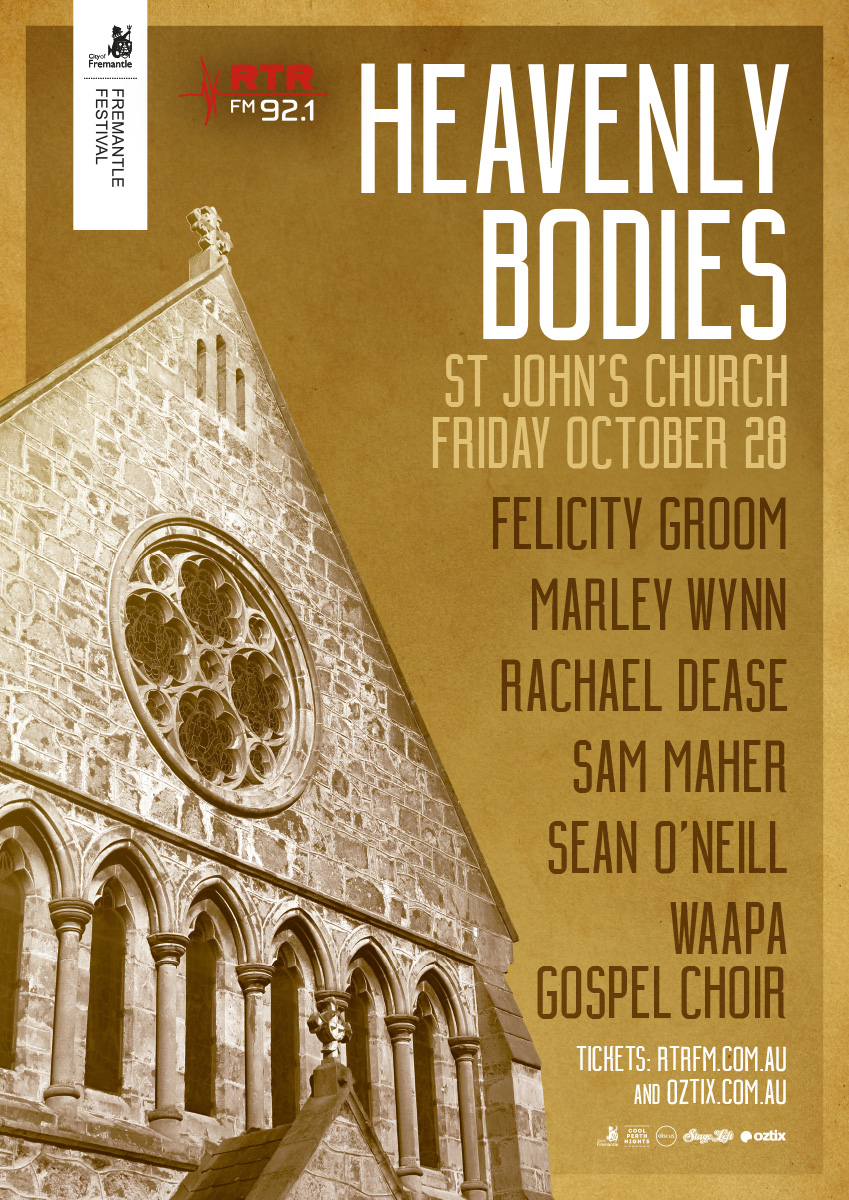 Heavenly Bodies is SOLD OUT – there’ll be limited tickets available on the door. $15 for RTRFM subscribers, $20 for general admission. RTRFM presents HEAVENLY BODIES – an evening of celestial music at St John’s Church in Fremantle as a part of Fremantle Festival on Friday October 28.

There are few voices in Western Australia more compelling than FELICITY GROOM. Equipped with delicate, saintly vocals and a flair for exquisite songwriting, Groom might just be our state’s best kept secret. The pedigree of her myriad collaborators – Diger Rokwell, Kevin Parker, Jay Watson, Julian Barbagallo – speaks to her boundless talent as a musician and a voice, drawing frequent comparisons to names like PJ Harvey and Nick Cave. Live appearances from Groom have been far and few between this year – in the beautiful surrounds of St John’s Church, this is an unmissable performance.

SEAN O’NEILL composes music for daydreams. Formerly the frontman of alt-folk outfit Hang On St. Christopher, O’Neill’s musical exploits over the years since that band’s demise have seen him push the limits of loops, low-key brass and a wide array of experimental sounds. The result is a display of breathtaking minimalism, combining O’Neill’s penchant for formidable songwriting with impeccable musicianship and his knack for discovering uncharted territories of sound.

The résumé of MARLEY WYNN – the new moniker of Perth musician Adrian Hoffman – beggars belief. Renowned for his time fronting Perth outfit The Morning Night, Wynn’s spent the past few years lending his talents to a number of he’s heroes, playing guitar and keyboard with the likes of The Triffds, Steve Kilbey of The Church and Davey Lane of You Am I. Wynn’s latest single, Mercuy Zoo, sees him channeling the songwriting prowess of his collaborators, producing material that’s equal parts compelling, forward-thinking and endlessly enchanting.

SAM MAHER couldn’t have predicted the explosion of attention that would come from a simple busking session in an abandoned subway. Maher is a formidable musician in his own right, having played drums with Katy Steele, Sugarpuss and Grace Woodroofe amongst others. But earlier this year, he found himself thrust into the viral spotlight when a short video performance of the Handpan spread like wildfire across the internet, garnering well over a million views. The Handpan – otherwise known as a Hang – is a percussive instrument with an incredible harmonic range, sounding like a combination of a steel drum, a xylophone and a synthesizer. The resulting sound is something like a chorus of angels – the perfect sonic tool for Maher to craft brilliant and ethereal soundscapes.

There are few musical realms more celestial than the sounds of a gospel choir. Composed of WAAPA music students from the Contemporary Music Program, the 20-piece WAAPA GOSPEL CHOIR have performed at His Majesty’s Theatre, the Fairbridge Chapel, and recently collaborated with Perth rapper Drapht. The resulting harmony if voices is uplifting and immensely powerful — a contemporary, forward-thinking recontextualising of a timeless musical tradition.