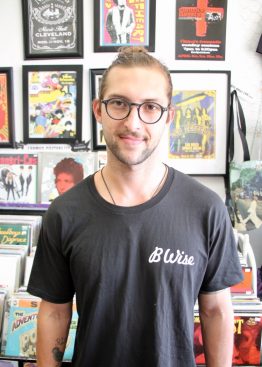 My Family introduced me to music at a very young age, I remember having singing contests with all my older (female) cousins when I was about 4 years old at our massive family reunions. My dad would always argue with my uncles about who had a better music scene, Australia or the UK. Uncle Terry or affectionately known as George (short for George Harrison) was a big influence on my early listening as I became obsessed with the Beatles until Dad gave me the INXS album “kick” and my fascination with the Australian Music scene began.

I enquired about the January training course as I heard one of my friends was leaving the station and with my work as a music reviewer and DJ I wanted to get involved with the sound alternative because it offers the best forum for local artists.

J Dilla – The Shining
Sticky Fingers – Caress Your Soul
Radiohead – Kid A
Horrorshow – Inside Story
The Strokes – Is This It?

Tough one. I love the people, they’re so inspiring and always ready to help but I think its the feeling of delivering something you love and treasure to an anonymous audience every time you’re on air.

I rocked up 3 hours early to a graveyard shift and had an all nighter writing to make it through to my show.

The Mag, I love interviewing people and learning from their experiences. I’m a journalist by trade and I believe there is a lesson in every story, providing a forum to break stigmas an re-educate the ill informed on social issues is very important to me.

I’m a music journalist, barista and Photographer/DJ/sports enthusiast. I have done work with the Greens at the last Election, Howl New York, Pilerats.com and Aime Mentoring.