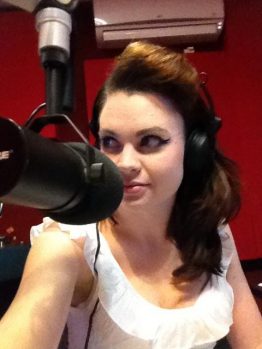 Kristie Butler is a musical, friendly and talkative soul who found herself mixed up in the world of RTRFM in 2011. She naturally ended up on Drastic on Plastic due to her fondness for geeking out about music and getting on her feminist high horse. If you find yourself listening to her show, why not call her up? Then you can geek out and get on high lady-horses together.

I involved myself with RTR as part of my uni course at WAAPA in 2011, and I suppose I couldn’t stay away afterwards!

5 albums, though. That’s a rough deal. I’d probably sneak some Bowie in there too so I could bounce around in space to Space Oddity. RULES ARE MEANT FOR BREAKING!

The RTRFM community is fabulous. They give me warm fuzzies.

By night I skate around under the pseudonym Bowie SinSkates (a little nod to Bowie’s in Space by Flight of the Conchords, as well as David Bowie himself) and play roller derby. I play guitar and sing in a couple of bands and I have a cactus son. That about sums me up really.