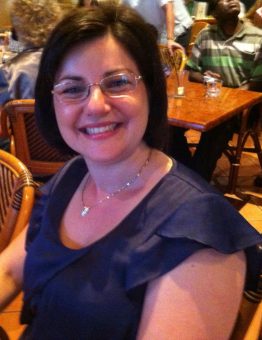 How did you develop your love of the music that you play?

I have always listened to nostalgia music since I was in my teens, and my father was an avid jazz music buff and loved old movies.  I also joined the Judy Garland Club when in my teens and my love of all nostalgic music grew from there.

How long have you been listening to RTRFM?

I have listened to the Nostalgia program for nearly 25 years, when it was originally 6UVS-FM.

I heard the callout for new presenters 3 years ago and was interested in joining the team, but was about to give birth to my daughter and the timing wasn’t quite right.  Then I heard an announcement in January 2013 that Nostalgia was again calling out for presenters, and I knew this might be my last opportunity!  I was already acquainted with both Reg Brearley and Richard Leslie, so they knew of my love of the nostalgia music and my appreciation of the show.

What 5 albums would you take with you on a desert island?

If you could present another show, what would it be and why?

I love the music played on Saturday Jazz and a lot of the music of Nostalgia blends in with this program.  Also, I love the mellow songs of Sunday Morning Coming Down and always listen to the show after Sunday Nostalgia.

After working in an office as a secretary for nearly 15 years, I have spent the last five years at home raising my son, James, and my daughter, Emma, and keeping my husband Stuart in order!