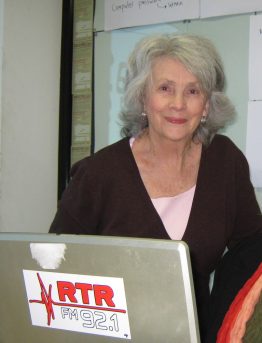 I fell in love with radio while lying in my pram listening to Mum’s serials.

My first job, aged 15, was at 6PM in the programme department, filing, cataloguing, making morning tea and learning about programming.

I went on to other jobs until I heard the breakfast announcer on 6IX, Monty Menhennett, say they were looking for a junior typist. “That’s for me!” I thought and wearing my lucky pink scarf and beret got the job and later married him. He was paid for doing breakfast for 9 years while I have now been doing it, on and off, for 24 years unpaid.

While working at 6IX I met lots of interesting people, including Jack Davey, Donald Peers and Terry Dear. Terry Dear was compere of Australia’s Amateur Hour and I had the joy of working behind the scenes and sat with Mrs Dear in the private box at the Capitol Theatre as it was presented.
During that time I also made the cover of The Broadcaster which was to radio what TV Week is to television.

While a member of the Perth Jazz Club I presented a jazz programme on Radio Fremantle and after moving to York was very involved in the Voice of the Avon, presenting a variety of programmes including ‘Writers’ Corner” which I produced and participated in. That led to me writing children’s stories and reading them at the school.

I have 4 wonderful children, 5 grandchildren, 1 great grandson and many step children and their offspring. Monty died and I married a second time. Earnshaw is my maiden name.

While in York taught myself to play the pipe organ in the Holy Trinity Church and was organist for 14 years. I was accompanist for a couple of choirs and often played music and did skits for nursing homes.

My Canadian grandson was born in 1992, when I began presenting Nostalgia. I commuted from York until about 2011 when I retired from the programme.

Now, after relocating back to Perth in 2016, it’s great to be back in the Nostalgia family.