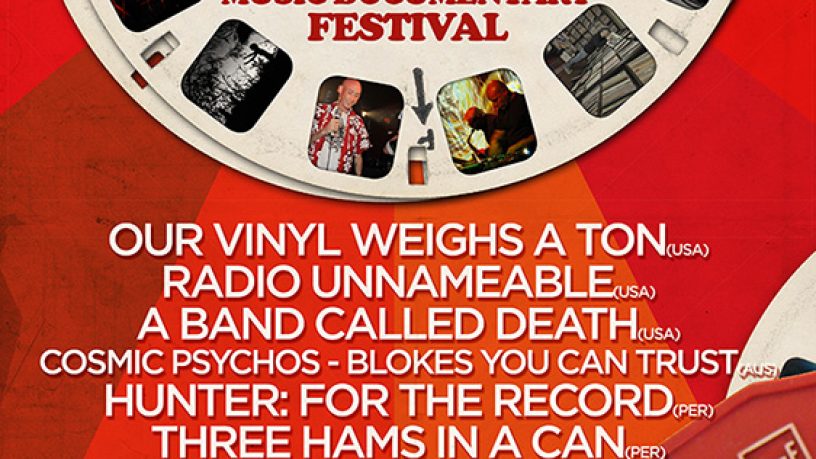 RTRFM is more than just a radio station, it's everything and now it is home to Australia's first Music Documentary Film Festival. Gimme Some Truth, comprised of 10 independent and thought provoking films that look at the world of independent, underground and life changing music.

All this week on the station we have been looking at those who have made the films and the stories behind the stories.

Graeme "Gimme Some Watson" Watson put them all together on Artbeat.

Founded in Los Angeles in 1996, Stones Throw Records has been a bastion of the underground hip-hop scene from its very beginning. Launching the careers of luminary beatsmiths such as J Dilla and Madlib, and modern funk and soul stars like Dame Funk and Mayer Hawthorne, Stones Throw has carved a successful musical niche whilst blazing a trail away from the mainstream.

The label is celebrated in Our Vinyl Weighs a Ton, which is our opening night film for the Gimme Some Truth music documentary festival. RTRFM's Music Director Dr Adam Trainer caught up with the film's producer and director Jeff Broadway, and began by asking Jeff how his path into filmmaking began…

DJ Bob Fass was a central figure in New York's underground radio scene, and was witness to some of the biggest social upheavals in recent American history.  He interviewed legends like Bob Dylan and Joni Mitchell when they stood on the precipice of fame. And he did it all on a station that encouraged occasional stretches of silence.

Directors Paul Lovelace and Jessica Wolfson have made a love letter to Bob and his legendary program called Radio Unnameable.

Ahead of the film's debut at RTRFM's Gimme Some Truth Documentary Film Festival, Quickflix's Simon Miraudo asked Paul and Jessica whether or not Bob was open to having a film made about him.

GIMME SOME DEATH: PART I

Which forgotten musical artist can follow in the footsteps of folkster Rodriguez to receive a resurrection thanks to some enterprising documentarians? Directors Mark Christopher Covino and Jeff Howlett make a good case for proto-punks Death with their doco, A Band Called Death.

Comprised of brothers Bobby, Dannis, and David Hackney, Death recorded a series of songs in 1974 that were basically buried when Columbia Records' president Clive Davis objected to their band's name. Forty-years later, the surviving Hackneys see late success when their music becomes an underground sensation.

A Band Called Death is this year's Searching for Sugarman, or Anvil: The Story of Anvil, in that it casts its eye over a long-forgotten band that gets to taste fame several decades after they first debuted. Simon Miraudo spoke to the doco's directors, Mark Christopher Covino and Jeff Howlett, ahead of it’s screening at the RTRFM Gimme Some Truth Film Festival.

In the second part of their conversation, Mark and Jeff talked about recruiting Death fans like Elijah Wood, Questlove, and Alice Cooper for their flick…

GIMME SOME BLOKES –YOU CAN TRUST

Great men are forged in fire. It is the privilege of lesser men to light the flame. Whatever the cost.

And some great bands have that job. Australia’s Cosmic Psycho’s have blazed a trail of empty beer cans and busted eardrums around the globe with their pounding punk rock.

While other, lesser, acts achieved notoriety and stacks of cash, these guys made a lot of noise but weren’t as heard. They took their sound around the world, playing heaps of gigs and drinking all the beers, but always came home. Their story is told in the documentary ‘Blokes You Can Trust’.

GIMME SOME FRIDEY - AT THE HYDEY

Lindsay Hallam and a collection of Perth filmmakers decided that the story of the Hydey needed to be told. Making its world premiere on the final day of our inaugural Gimme Some Truth Documentary Film Festival, this is a story of a scene and the loss of a friend.  Hydey lover, RTRFM’s Chris Wheeldon spoke to director Lindsay Hallem about the movie and started by asking what it feels like to have the film finally completed…

Perth-based experimental outfit Masonik will present a live score for the infamous 1922 Danish occult classic Häxan: Witchcraft Through the Ages.  Benjamin Christensen’s legendary film uses a series of dramatic vignettes to conflate the persecution suffered by witches of the Middle Ages with the hysteria of turn-of-the-century psychiatric patients.

Masonik utilise disparate instrumentation to meld a soundworld that is truly immersive and exploratory, and will provide a gripping alternate score for this beautiful and infamous classic of early cinema. Peter Barr spoke to Masonik earlier this morning…

In 2008 Kenta McGrath followed his friends Pex, Stina and Chris Cobilis to Japan, as they took their music to audiences across the country. The resulting film, Three Hams In A Can, is a paean to friendship, travel and the conversations that sometimes get lost in translation. Chris Cobilis stopped by Breakfast for a chat with Peter Barr and Movie Squad's Tristan Fidler, to talk about his experience of being the subject of a music documentary.