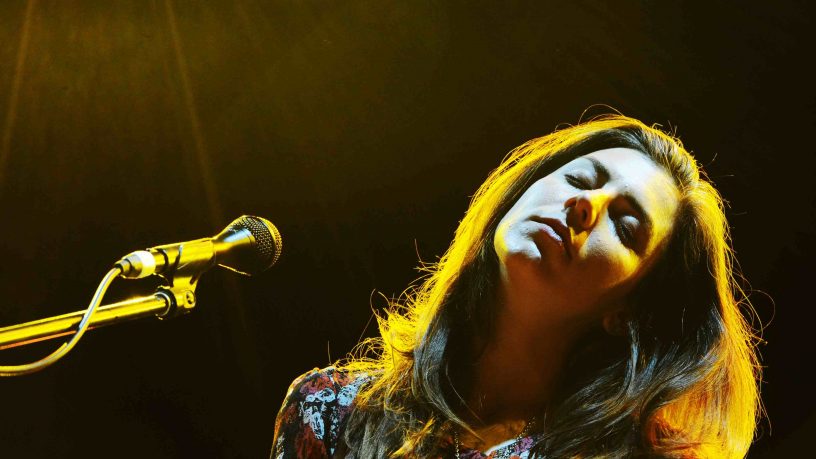 When she was first in Perth just over a year ago Julia Holter played to a small crowd of no more than 70 – more inquisitive than attentive – as part of the Laneway festival. Since that time she has released her third studio album, Loud City Song, to almost universal critical acclaim (it made four out of five Out To Lunch Top Tens last year), and her profile certainly seems to be on the rise. With this in mind, Holter clearly still only has cult appeal in Perth, as it was a small, but significantly more attentive and engaged audience who turned out on a Monday night to see her play at Festival Gardens.

Matt Mondanile of Brooklyn indie-rock outfit Real Estate opened the show with his solo Ducktails project, offering a short, disarming set of jaunty pop confections, playing guitar and singing over backing tracks. It was a pleasant and upbeat way to begin, but like many shows in the Festival Gardens, the large audience space was populated early on by a rather tiny contingent, as punters milled about in the bar before the main act. Mondanile didn’t seem too perturbed, but it did feel like he was playing to a handful of attentive listeners and vacuum of absentees.

Thankfully by the time Julia Holter and band took to the stage the numbers had filled out, though not significantly. It must be disconcerting for performers who can play to packed houses in larger cities to walk on stage in Perth and play to a (just over) half empty venue with a capacity of 1400. Nonetheless, Holter and her four accompanists (cello, violin, drums and saxophone) didn’t falter musically, maintaining an excellent balance between arranged tightness and less structured atmospherics. Seeming rather cool and detatched at first, after several numbers Holter warmed, as the mood of the crowd lifted.

By mid-set Holter seemed perfectly comfortable, and the audience – some of whom may have been less than familiar with the material – had settled into a keen and appreciative vibe. Although they stuck mostly to material from Loud City Song, with ‘Maxims I’ and ‘In the Green Wild’ particular standouts, the set was scattered with a few newer numbers, consolidating Holter as a prolific writer (three full-length albums in three years is evidence of that). Arguably the highlight of the main set though, was ‘Marienbad’ – the opening number from 2012’s Ekstasis, which encapsulated Holter’s demure yet pristine vocal style, and her peerlessly subtle but emotive compositional prowess.

After a short spell the band returned for a two song encore: a new song, and a welcome rendition of ‘Goddess Eyes’, a tune which appears on Holter’s debut Tragedy and again twice on Ekstasis. It provided a gorgeous denouement to an impeccable set, perhaps made even more special by the fact that it was shared with a small but attentive crowd.

One can only hope that Julia Holter will continue her prolificacy in terms of recorded output, that this will bring her back Perth soon – and that in the meantime a few more will catch on to her beguiling brand of avant-pop. Next time it would be nice to greet her with the rapturous welcome that such a talent deserves.