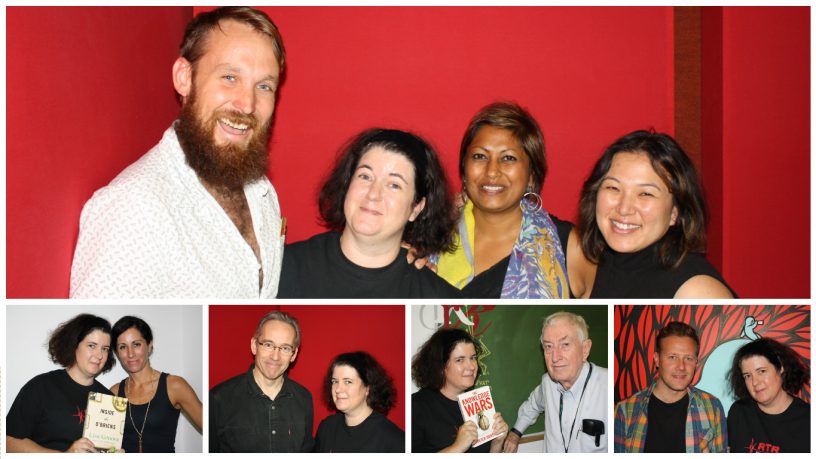 As Perth Writers' Festival dawns upon us this weekend, Artbeat delved into the worlds of neurology, Nobel prize-winning scientists, linguists, vegetarian cooks & more for a taste of what the weekend's writerly festivities hold.

Jasper Fforde has been more than a little prolific in the fifteen years he’s been writing novels as the publication of his 14th novel is almost upon us. He’s the first Perth Writer’s Festival author in the studio this morning, here to tell us about his new book, and how he’s managed to put out almost a novel a year.

Watching neurological diseases like Alzheimer’s progress can be a terribly painful experience – and a terribly lonely one too. Lisa Genova got her Ph.D. in Neuroscience before she became an author, and it shows.

Martin McKenzie-Murray’s been a writer for a while – speeches, newspapers, blogs – but he’s also been an adviser to the chief commissioner of the Victorian Police. Most importantly, he grew up in the suburbs of Perth – the same suburbs where, in 2004, a young woman was found murdered. His new book tells the story of that crime, and Martin’s own experience of the suburbs that contained it.

There are those of us who believe that studies and surveys should be the foundation of all political action – and then there are those who seem to believe in things almost because the science is stacked against them. Nobel prize-winner Peter Doherty has written four books on the importance of living in an evidence-based reality, and he’ll be at the writer’s festival to speak on exactly that topic.

Don Watson has written and spoken extensively on the evils of what he sees as a declining public language, as well as celebrating plain-spokenness in the political sphere, wherever and whenever it appears. Our very own linguistic wizard Daniel Midgley is joined Don to chat about where language and politics are at in Australia.

This weekend, Jae Laffer will be curating a whole series of live performances celebrating how one art form literature can fuel another music. He joined Kylie Sturgess to talk about his own experiences writing songs for The Panics.

Sustainability has become a huge part of our culture but perhaps nowhere more-so than at the kitchen table. This year’s writer’s festival is taking that fact to heart and Indira Naidoo and Paul West are a big part of the spotlight on local, ethical, delicious food. Both of them are passionate advocates of growing what you can at home, dodging the industrial fertilizers, and celebrating what’s in season.

The New Vegetarians
Vegetables haven’t traditionally been the hottest thing in food but lately, that seems to be changing a bit. Writer Hetty McKinnon joined Artbeat to discuss what the world of vegetables looks like in 2016 - and how she ended up delivering salads to her neighbours in Sydney and Brooklyn.