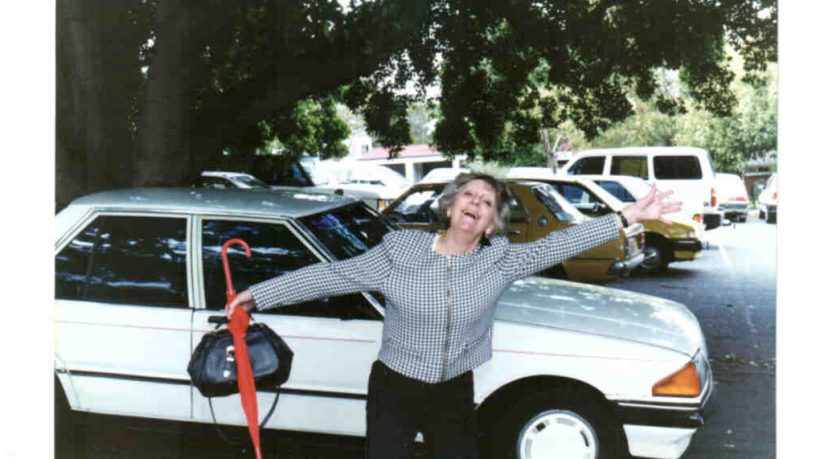 RTRFM would like to send our condolences to the family of former RTRFM Presenter and volunteer Pat Hardstaff. Pat was one of the first presenters of Nostalgia when the show began on Sundays and is remembered below by current Nostalgia presenter Reg Brearley. We found the attached photo in the RTRFM archieves. Pat was known for her ability to welcome new volunteers to the station and for her work behind the scenes keeping things going.

Richard Leslie and I attended Pat Hardstaff’s funeral yesterday. I was a small gathering of family members and Richard and I were the only others present. Sad when we think of her involvement in 6UVS, Little Theatre Mosman Park, Kings Park Guide, Arthritis Foundation. Pat was 90.

We met her daughters, Connie and Lindsay. Another daughter died some time ago. We had met Lindsay before. She remembered Richard’s shop in Claremont and me borrowing CDs from Pat’s collection.

In her eulogy Lindsay spoke of Pat driving ambulances and army vehicles during World War 2 in Britain. Pat was involved in training drivers and was meant to teach Princess Elizabeth (now the Queen) but got cold feet. (I remember Pat telling me that story). Once I was driving her to collect records being donated to the station and Pat told me I was a good driver. “I know about driving.” she said.

She was divorced not long after arriving in Australia. There was a slide show with some wonderful sepia photos of Pat as a young girl and woman in the UK. The accompanying music was a light classical guitar piece. She would have approved. She lived in Busselton at one time and become involved in amateur theatre there.

The family was delighted that Pat’s passing was mentioned on Nostalgia and there was response from listeners. Richard and I hadn’t realised that Bonnie went back that far.