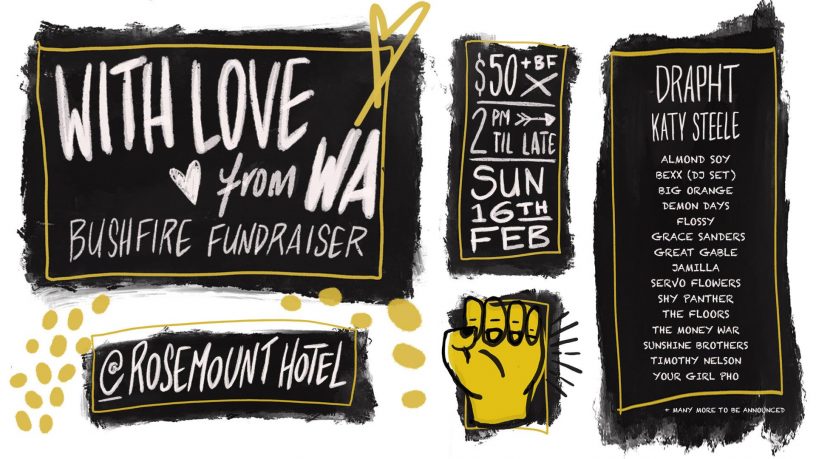 Australia is on fire. The past few weeks has brought utter devastation to our country, people, communities, land and animals. And in all the horror, we've seen so many people band together to help those that have been affected and those risking their lives and fighting the fires.

After feeling a little helpless and not sure how to support our neighbours in need, local band Great Gable's manager Kelsey got a few mates in the Perth music community together to organise something to help those that have been affected. In response to the east coast fires, the Perth music community has come together to present With Love From WA - A Fundraiser for the East Coast Fire Disasters, on Sunday 16th February at Rosemount Hotel with 100% of funds raised going directly to people and animals affected by the bush fires.

Perth artists were quick to jump in and donate their time to this exemplary effort to deliver aid to those affected by this calamitous National disaster. The first announcement features prominent acts including Drapht, Katy Steele, Great Gable, The Money War and Demon Days amongst a slew of highly regarded Perth talent.

Kelsie plus Matt and Alex from Great Gable stopped by Breakfast with Tom to chat about how it all came about, what's in store for you at the gig and how the fundraiser will help those affected by the fires. You can check out the Facebook event here.

Tickets are $50+bf from Oztix, with 100% of ticket sales including the booking fee being donated to the cause. You can grab you tickets from from here.