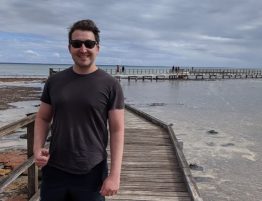 After having spent my formative years growing up in the UK, I returned to Perth on the cusp of my teens and discovered music played a massive part in consolidating and developing my friendships. From those early days listening to and laughing at parody songs found on Limewire in primary school, to making mock-Marxist readings of popular songs, to then being introduced to RTRFM and attending my first local gigs, music has been a significant component of my social circles, and I foresee it continuing to be until my final days.

A friend linked me to an early Revolver show he did and I asked how I could become involved… was helping out in the communications side of things before finally taking the plunge and doing the DJ course.

The people, the community spirit, discovering new music, finding out about the great music made here in WA….there’s a lot to love really.

The bloke who phoned up to give me some presentation pointers during my first show. Strange because I didn’t expect that kind of in-depth guidance at 3AM on Christmas Day – but I appreciated it all the same.

I would love to present Drivetime. I has the freedom of track choice like Snooze Button but it’s at a more friendly hour.

I am an English teacher at the moment. I worked in TV sales before that. Before that I was a pleb. Who knows what I’ll be next? As Doris Day once sung, the future’s not ours to see.