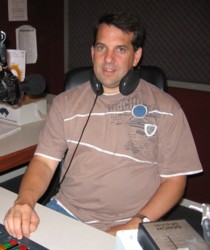 I was born in the sixties but was really too young to know the music then.  When I did become interested in high school I was lucky enough to have friends with older siblings who had interesting record collections.  So that’s where my love of music grew.  I am very much into the psychedelic music that I missed the first time around.  If I had to nominate a perfect song it might be “Alabama Bound” by The Charlatans (US 60s band not the UK 90s one) … or maybe “Willie the Pimp” by Frank Zappa … or “I Can See for Miles” by The Who … or ….

I had been listening and subscribing to Woodstock Rock for a number of years.  One of the presenters on the show asked me to come in one night and play a set.  I started doing a show every couple of months or so and it grew from there.

It is great to be around people who are all passionate about their music.  There is a real mix of different musical tastes at the station and everybody respects that difference.

Our listeners too are passionate about their music and I have discovered new artists to listen to after talking to people who ring in to the show.

I am not sure that I have enough knowledge or material to present another show.  I enjoy Posted – some of the music has stylistic links with German bands of the 70s but evolved into a new style.  Also Spoonful of Blues – the Blues underpins so much that has happened in rock.

I am doing some study, some work, some music collecting.